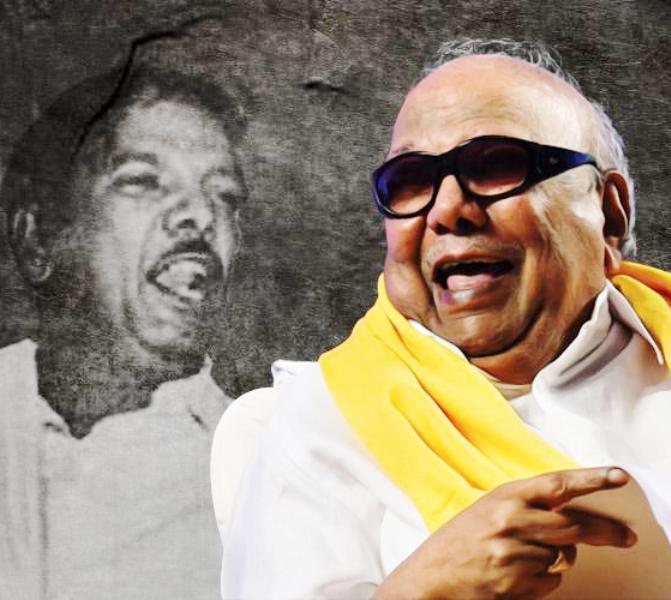 Though Tamil Nadu is observing the appearance of superstars like Rajinikanth and Kamal Haasan but on the political horizon, the state will always miss one of their most charismatic Chief Ministers – M. Karunanidhi. Besides being a prolific politician, his story has many facets to be unfolded. Let’s get into detail about the story of M. Karunanidhi:

On 3 June 1924, M. Karunanidhi was born as Daksinamoorthy into an Isai Vellalar Hindu modest family in Thirukuvalai, Tanjore District, Madras Presidency, British India. The Isai Vellalars reportedly relied upon the temple for their survival by playing Nadaswaram; a wind instrument. He was born at a time when the struggle for India’s independence and casteism were at its peak, and Tamil Nadu was no exception. He initially faced caste restrictions of that time when he used to go for his music classes. He wasn’t permitted to cover his upper body and his music learning was also limited to a few songs.

Despite all the social inequalities, his love for Tamil Art and Literature blossomed. When he was in his 5th standard in Tiruvarur, the Justice Party lost the election. The next year, the first Congress government came into power in Madras. And, when Rajaji became the chief minister, he wanted to make a law to make the learning of Hindi in schools compulsory. This created agitation among the Tamil people, one of which was M. Karunanidhi.

On 3 June 1938, the first Anti-Hindi protest took place in Saidapet, Madras, led by Maraimalai Adigal. Pattukottai Azhagirisamy of the Justice Party, led a march throughout the state in protest against the imposition of Hindi. Karunanidhi witnessed one of the speeches that activated Karunanidhi’s inner Tamil activist. Thereafter, he became a student activist in Periyar’s Self-Respect Movement to fight for the rights of the Dravidians.

As a young Tamil student, he started doing street protests. His artistic “Kalaignar” and oratorical skills got refined when he started giving firebrand speeches and started a magazine. His political activism found favour with Periyar and his lieutenant CN Annadurai who gave him political space. In 1939, Rajaji’s tenure ended and the interim government abolished the introduction of Hindi, which was the first victory for the anti-Hindi protesters like M. Karunanidhi.

Failed As A Student, Rose As A Writer

Though he failed to clear his higher studies, his passion for writing reached the next level. He left his studies and founded a student organisation called ‘Tamil Nadu Tamil Manavar Mandram,’ the apex student wing of the Dravidian Movement. He also started doing social works and went on to start a newspaper that later on became ‘Murasoli,’ the DMK party’s official newspaper. In the midst of revolutions, he had his first marriage with Padmavathi in 1944. The style of marriage was inspired by the Dravidian Movement, without any ‘Mangalsutra’ and ‘Brahmin’ priests. According to sources, it was love at first sight for him that made him a more responsible person who had started looking for a steady source of income. He then started working for ‘Dravida Nadigar Kazhagam’ and wrote scripts for their plays to promote their Dravidian ideology. Unfortunately, she died after 3 years in 1947; leaving behind a son, M. K. Muthu.

When he was in Pondicherry (now, Puducherry), a local lawyer asked him to write an article for his magazine ‘Thozhilaalar Mithran.’ Karunanidhi wrote an article called “That Pen!,” which was based on Mahatma Gandhi and the Congress, specifically, on a pen that was lost from the Sabarmati Ashram. However, his next article titled “What if Gandhi Became the Viceroy?” ignited the Congress workers of Pondicherry. When the trio Periyar, Anna, and Pattukottai Azhagirisamy addressed a public meeting, they saw a huge protest from the Congressmen who booed them by saying, “Dravidian leaders! Go back!.” The verbal protest suddenly turned into a violent protest and the Dravidians had to run away in fear of getting beaten down. M Karunanidhi, like other Dravidians, was looking for a house to hide and even got one. However, the Congressmen found him and beat him until he lost his consciousness. The Congressmen thought he was dead and threw him into the sewers. Luckily, he survived and was rescued by an old woman who took him to the place where Periyar was staying.

His bravery, exceptional oratorical skills, essays, newspaper articles, and theatre plays, hugely impressed Periyar and C. N. Annadurai, who rewarded him by making him the editor of the Dravidar Kazhagam Party magazine, ‘Kudiyarasu.’ When India got its Independence in 1947, he chose Annadurai over Periyar after the split of the “Anti-Hindi” Movement. The same year, he also garnered fame for writing the screenplay of the Tamil film ‘Rajakumari,’ starring M. G. Ramachandran and K. Malathi. His financial status swelled up after it, and he started earning ₹10,000 a month. In 1948, his life started taking positive turns as he got remarried to Dayalu Ammal.

Inception Of The DMK

On 17 September 1949, the state political party of Tamil Nadu and Pondicherry, the Dravida Munnetra Kazhagam (DMK) was formed by C.N Annadurai, and M. Karunanidhi played a vital role in making it happen. From 1950 onwards, he was in a win-win situation; in both films and political front. In 1952, he became a star writer with the debut film of Sivaji Ganeshan, ‘Parasakthi,’ which went on to become a cult film. He also gained political prominence in 1953 when he led ‘Mummunai Porattam,’ a series of agitation against the government decision to rename Kallakudi railway station as Dalmiapuram.

Flurry Of Promotion In The DMK

In 1957, he got elected to the Tamil Nadu Assembly for the first time; from the Kulithalai seat of Tiruchirapalli district. Consequently, in 1961, he was made the DMK Treasurer, and a year later, the Deputy Leader of Opposition in the state Assembly. In 1967,  he was made the Minister for Public Works and Highways, after which DMK formed the government. The Secret Behind His Dark Goggles

In the late 1960s, he had met an accident that damaged his left eye. On medical recommendation, he started using dark goggles to shield his eyes from exposure to sunlight. However, his goggles became a trendsetter, which is still being followed by his supporters in Tamil Nadu. 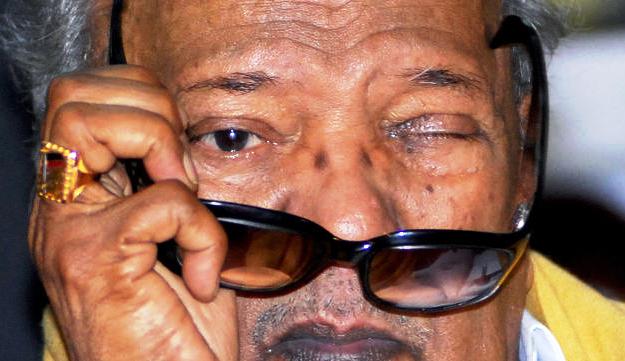 M Karunanidhi Taking Off His Goggles

All is Fair in Love And War for Kalaignar

His married life with Dalayu Ammal derailed in the 1960s after he had an extra-marital affair with Rajathi Ammal. Things came out in the public domain when he preferred to refer Rajathi Ammal as his daughter Kanimozhi’s mother. Karunanidhi was aware of the fact that he couldn’t get married to Rajathi as per The Hindu Marriage Act, 1955. So, he made a new way and got married to her via DMK’s new marriage tradition- ‘Swayam Maryada Kalyanam’ to escape the prevailing marriage laws. 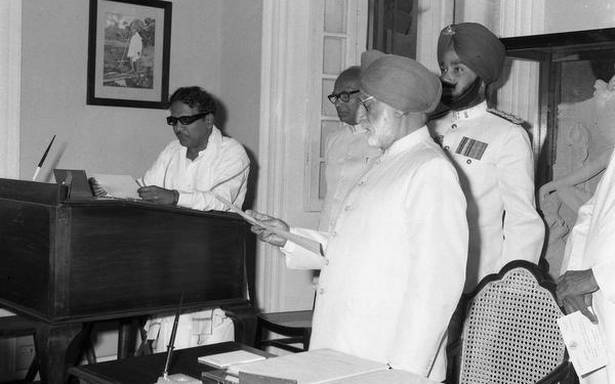 On 3 February 1969, Annadurai fell ill and died. Karunanidhi was the very obvious choice to succeed Anna, and eventually, became Tamil Nadu’s Chief Minister for the first time on 10 February 1969.

M. Karunanidhi and M.G. Ramachandran or MGR met in the 1940s and became close friends, who not only shared the struggles in films, but also in politics. young people in films and politics face. MGR’s breakthrough was scripted by his close friend in the 1950s hit ‘Manthiri Kumari.’ It was Karunanidhi who inspired MGR to move from the Congress to the DMK in 1953, who brought a huge fan following along with him when he joined the DMK. Things worked in tandem for around 30 years, but Karunanidhi’s ambitions came in between; as he wanted to rise out of the shadow of not only Anna but also MGR. After getting an enormous mandate in the 1971 assembly elections, MGR was not given any place in the cabinet, after which he split up with the DMK in 1972 and formed a new party, All India Anna Dravida Munnetra Kazhagam (AIADMK).

Emergency And its After Effects

If 1972 was his rise, 1975 was his fall. M Karunanidhi, as the Chief Minister of Tamil Nadu, opposed Indira Gandhi‘s Emergency but like other Indian states, his government too was dismissed. In 1977, when the Emergency was lifted, MGR took the revenge after he made an alliance with his old friend Congress and won the post-Emergency elections in the state.

It was the revival of the DMK in 1989 when he came in power after 13 years, but they made such a blunder that changed the Tamil Nadu’s politics forever. On 25 March 1989, the Tamil Nadu Assembly witnessed the deja vu of Mahabharata’s Draupadi Vastraharan by Duryodhana, where Jayalalithaa replaced the role of Draupadi and the DMK’s Durai Murugan, and his colleague, Veerapandi Arumugham replaced Duryodhana. When the war of words was at its peak between the DMK and the AIADMK, Jayalalithaa made it even more dramatic by pointing to her saree and saying, “My saree was pulled and torn, ” and pointed the finger towards Durai Murugan (the then Minister in the DMK Cabinet). Jayalalithaa extracted every bit of political mileage out of this issue and used it as a sympathetic weapon in the 1991 election campaigns and registered a spectacular victory with a record vote share.

Revival At The State and Centre

In 1996, the DMK made a strong comeback, not only in the State but Centre as well. They formed an alliance with the Tamil Maanila Congress (TMC)- a Congress fragment group and came to power. The DMK also joined the Deve Gowda-led United Front government at the Centre. 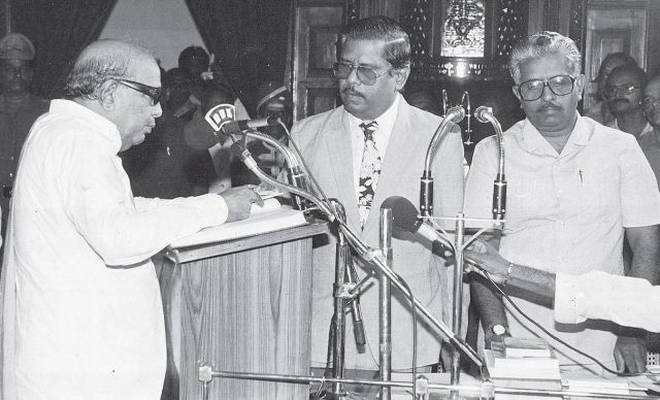 In 1999, he made an alliance with the emerging National Democratic Alliance (NDA), and the DMK was rewarded with 3 ministerial berths, with Murasoli Maran, T.R. Baalu and A. Raja joining the Atal Bihari Vajpayee cabinet. In just a matter of few years, the DMK realised that they made the wrong move by shaking hands with the NDA, especially the BJP that holds an image of a “Pro Hindu” party after the Godhra killings and riots of 2002. In 2004, he made the right move for his party and joined hands with the Indian National Congress (INC) and secured a landslide victory in the Lok Sabha elections. Under the umbrella of this alliance, he went on to become the Chief Minister for the 5th time in 2006. His Dog Made Him Vegetarian

Though he had always been a non-vegetarian, after the death of one of his pets, Blackie, a Dachshund, he got so moved that he didn’t eat non-vegetarian food for around 2 years. He later returned to his non-vegetarian diet on medical recommendation. The 2G spectrum scam of 2008 was enough to sink his floating political ship. His daughter, Kanimozhi, and his party member, A. Raja got arrested in connection with the 2G Scam- a scam that incurred a loss of ₹1.76 lakh crore to the exchequer of India. Though they were acquitted of all the charges in the 2G Scam, the DMK had already lost the ground till then; as the DMK was trashed in the 2016 Assembly elections by their arch-rivals, AIADMK. There was a constant decline in his health in the monsoons of 2018. On 28 July 2018, he was admitted in Kauvery Hospital, Chennai; following a dip in his blood pressure. Though he was treated with active medical support, his struggle lasted for 10 days, and on 7 August 2018, at 6:10 pm, when he took his last breath; following a Urinary Tract Infection; leaving behind his 61-year-old legacy. He was laid to rest at Marina Beach’s Anna Memorial in Chennai, and the Tamil Nadu state observed a 7-day mourning as a mark of respect.

For a detailed profile of M. Karunanidhi, Click Here