Taekwondo is a traditional Korean martial art and Olympic game practiced in 206 countries. It is one of the most popular contact sports in the world which is followed by people both for professional careers as well as for self-defense. It was developed in Korea after the Second World War by various martial artists. In Taekwondo, hands and feet are used to conquer an opponent, but the trademark of the sport is its combination of kick movements. Korea Taekwondo Association (KTA) is the oldest governing body for Taekwondo, which was formed in 1959 through a collaborative effort by representatives from the martial arts schools in Korea. Different Taekwondo federations use different forms, namely, Traditional forms, International Taekwon-do Federation forms, American Taekwondo Associations forms, Jhoon Rhee forms, etc. Dobok is the uniform of the Taekwondo practitioners; the uniform is often white but sometimes black, with a belt tied on the waist. These practitioners have to practice some techniques, i.e. Hand attacks, Kick, Blocks, Patterns, Self defense, etc. In addition to this, a number of hybrid martial arts incorporate Taekwondo techniques including Chun Khun Do, which was developed by Taekwondo pioneer Bok Man Kim. Here are the top ten Taekwondo players in the world: Steven Lopez from the United States is considered one of the eminent Taekwondo players in the world. He has a record of winning the Taekwondo World Championship six times. Steven is a 2000 and 2004 Olympic gold medalist and 2008 Olympic bronze medalist in Taekwondo. Lopez became the first official gold medalist at the 2000 Olympic Games. In 2001, he won the Lightweight Taekwondo World Championship, and in 2003, he won the Welterweight Taekwondo World Championship that he went on to win in 2005, 2007, and 2009 – making him the first Taekwondo fighter to win five World Championship. At the age of five, he first learned Taekwondo in his garage from his father and older brother Jean. He did his graduation from Kempner High School in Sugar Land, Texas in 1997, where he was a member of the National Honor Society and voted as “most likely to be succeed.” Mark and Diana, his younger siblings, also represented the United States at the 2008 Beijing Olympics; it was the first time since 1904 that three siblings were on the same Olympic team. Lopez has also appeared in People Magazine’s 50 Most Beautiful People. Hadi Saei is a former Iranian taekwondo athlete, who was passionate about taekwondo since he was six years old. He is considered the most titled champion in this sport by winning 9 world-class titles. He has won numerous international taekwondo championships and is one of the few Iranian athletes to take home the Olympic Medal. Saei has won two gold medals, a silver, and a bronze medal in the Taekwondo World Championship. He won the bronze medal in the 2000 Sydney Olympics and the gold medals at the 2004 Athens Olympics and 2008 Beijing Olympics. He has won nearly all of the taekwondo competitions he has performed in, holding a 90% success rate of winning. He began learning Taekwondo at an early age and went on to become one of the most successful martial artists in the world. He has suffered a great tragedy having lost his brother and father in the same year but this didn’t affect his career. Towards the end of his taekwondo career, he became interested in local politics. Hwang Kyung Seon is a female South Korean Taekwondo Practitioner. Apart from Hadi and Steven, she is the only Taekwondo player to won three Olympic medals.  She became the first Korean female athlete and the second Korean to defend an individual title in the Summer Olympics and win an Olympic individual medal in a particular event in three consecutive Olympic Games. After achieving the bronze medal at the 2004 Athens Olympics, she secured the gold medals consecutively in the 2008 Beijing Olympics and 2012 London Olympics. Kyung Seon won the gold medal at the 2006 Daha Asian Games and two gold medals and a bronze in the Taekwondo World Championship.   At 26, she became the youngest Korean to achieve these records. She is also the first woman ever to win three Olympic taekwondo medals. Born in Nurnberg, Germany, Servet Tazegul is a Turkish Taekwondo practitioner who competes in the featherweight division. He competed in the men’s 68 kg class at the 2008 Summer Olympics held in Beijing, China, and won the bronze medal. He has won one gold medal and one bronze medal in the Olympics Games as of 2020. Besides, he has also won two gold and one bronze medals in the Taekwondo World Championship. He also secured the bronze in the 2015 Taekwondo Grand Prix in Manchester. Tazegul has won the gold medal in the Taekwondo European Championship five times (as of 2021). In 2013, a multipurpose indoor stadium constructed in Mersin was named after Servet. 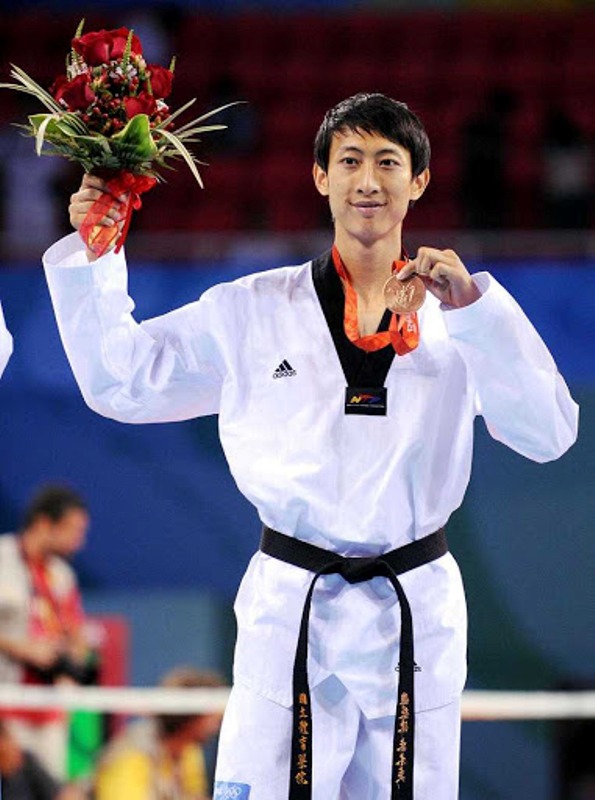 Chu Mu-yen is a Taekwondo athlete from Taiwan. His countrymen still regard him as one of the most successful Taiwanese athletes of all time. He is the second Taiwanese athlete and the first male to win a gold medal at the Olympics, winning in men’s under 58-kilogram class in Taekwondo at the Athens 2004 Games. Mu-yen then also won the bronze medal at the 2008 Beijing Olympics. He has often fought with larger and stronger people in the fly category and has shown the grit to face any opponent. He won the gold medal in the 2003 World Taekwondo Championships. He also has a world championship and a WTH World Cup to his name. Carlo Molfetta is a taekwondo athlete from Italy who is considered not only the greatest Italian Taekwondo athlete but also one of the greatest taekwondo athletes in the world. He came to prominence after winning the gold medal at the 2012 London Olympics. He won the gold at the2012 London Olympics in the men’s +80 kg division, beating Gabon’s Anthony Obame. Molfetta was determined to be the victor after the bout concluded in a 9-9 tie, with the judges ruling that Molfetta had won based upon superiority. He has mainly fought in the lightweight, middleweight, and featherweight categories. Molfetta has also won two silver medals and a bronze medal at Taekwondo World Championship. He finished his studies at the “Pirandello” Comparative Scientific High School in Rome, and in 2004, he participated in the Athens Olympics, but, due to his very young age, he could not participate in the event. His competitive career progressed along with serious injuries, which prevented him, among other things, from participating in the 2008 Beijing Olympics. In 2011, after regaining his fitness, he again won the Olympic pass at the Continental Qualifiers in Kazan (Russia) in the heavyweight category. In September 2016, he announced his retirement from professional taekwondo, and on 8 February 2017, the Italian Taekwondo Federation announced that it had entrusted him with the role of Team Manager of the Italian National Team of Taekwondo. South Korea has won the most number of medals in Taekwondo at the Olympic Games all due to players like Moon Dae-sung. Moon Dae-Sung is a retired Olympic taekwondo athlete from South Korea. Moon Dae-sung also made his name as a World Champion, Asian Games winner, and Asian Championship winner. Moon Dae-sung won a gold medal at the 2004 Olympics that was held in Athens, Greece in the heavyweight division after knocking out Greece’s Alexandros Nikolaidis with a reverse kick. After his high-profile win at the Athens Olympic Games, Moon became a well-known celebrity in South Korea, owing to his performance in the Gold Medal round. He has become the official Audi Automobile Company’s spokesman and has made numerous television and public appearances. His career started when he entered Dong-A University on a taekwondo scholarship in 1995 and performed consistently well in national competitions during his college years, though usually overshadowed by the dominant heavyweight champion Kim Je-Gyoung. Left leg roundhouse kick, left leg back kick, and reverse (with which he knocked out Alexandros Nikolaidis) as well as a solid grasp, make him a consistent and eminent Taekwondo player. Cha Dong-min is a retired South Korean taekwondo practitioner. He is a heavyweight category specialist who has secured gold medals at Olympics, Asian Championships, and East Asian Games along with a silver at World Championships. In 2008, he won the gold medal in the +80 kg category at the Beijing Olympic Games. Cha Dang then won a bronze medal in the same category at the 2016 Rio Olympics, and right after this achievement, he announced his retirement from international competitions. Hailing from Argentina, Sebastian Eduardo Crismanich is regarded as one of the greatest athletes in his country. Crismanich has also earned the reputation as the only Argentine athlete ever to win an individual Olympic gold medal since 1948. He won the gold medal in the men’s 80 kg division at the 2012 Summer Olympics. Sebastian has the distinction of being the second individual athlete to win a gold medal for Argentina, the maiden taekwondo medal for Argentina. The gold medal honor was established at the 1948 Summer Olympics when Delfo Cabrera entered the stadium concluding the marathon. He has also won the 2011 Pan American Games. It seems his whole family has Taekwondo skills in their genes as his brother, Mauro Crismanich, also won the World Taekwondo Championship bronze medal in 2009. He started practicing taekwondo at the age of 7. Although he liked football more, he wanted to accompany his brother Mauro in this martial art. In 2007, he settled in the province of Córdoba to study Agronomy at the National University of Cordoba and also practice taekwondo in the Sports Area of that institution. At the Pan American Games, he won the gold medal. His qualification for London 2012 was achieved by winning the Pre-Olympics held in Querétaro, Mexico after beating Steven Lopez.