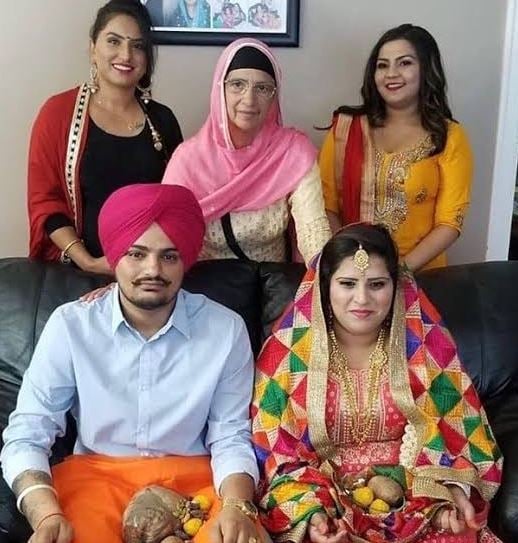 Who is Sidhu Moose Wala’s Fiancée?

Who is Amandeep Kaur?

Amandeep Kaur was born in the Sanghredi village of Sangrur. Amandeep Kaur is a permanent resident of Canada. Reportedly, she is the niece of a senior Akali Dal leader. Some sources claim that she was the assistant of Punjabi singer Sidhu Moose Wala.

My son Shubhdeep Singh Sidhu is getting married soon to his love of life as this is not an arranged marriage. Just a little more time he will not be a bachelor anymore. We are preparing for his wedding, which will take place this year after the elections.”

Sidhu Moose Wala was Shot Dead in May 2022

On 29 May 2022, Sidhu Moose Wala was shot dead in his Thar jeep in the village Jawaharke of Mansa district in Punjab by unidentified assailants when he was going to meet his relatives. During the incident, he was accompanied by two other men, and the assailants fired 30 rounds at his car. The two other men were also injured during the incident. Soon after the incident, Sidhu Moose Wala was brought to the Civil Hospital in Mansa, where doctors declared him brought dead. The responsibility for the murder was taken by a Canadian gangster of Punjabi origin, Satinder Singh alias Goldy Brar, soon after the incident went viral on various media platforms. Satinder Singh alias Goldy Brar is a close associate of gangster Lawrence Bishnoi. Goldy Brar also claimed that the shooting was carried out by his “Punjab Module” (gang). Later, Punjab police also confirmed that Bishnoi was involved in the murder. Before the 38th anniversary of Operation Blue Star in June 2022, the security of the 424 people in Punjab was reduced or entirely removed, and Sidhu Moose Wala was one of them. Earlier, the state government granted him four commandoes for his protection, but during the 38th anniversary of Operation Blue Star preparations, his security was reduced, and he was granted two commandos. At the time of the incident, Sidhu Moose Wala was not travelling in the bullet-proof vehicle, which was provided to him by the state government. He was accompanied by his two private security guards.

On 30 May 2022, it was claimed by some media sources that Sidhu Moose Wala’s murder could be a result of the killing of Vikramjit alias Vicky Middukhera. It was claimed that there was a rivalry between Vicky and Sidhu Moose Wala, and in August 2021, Vicky Middukhera was chased and shot dead in Mohali, Punjab. Consequently, an FIR was filed by Sidhu Moose Wala’s father at a local police station. In the complaint, his father stated that some gangsters were giving him death threats for extortion purposes. Meanwhile, his father’s statement was also confirmed by the Punjabi singer Mika Singh.

Inquiry into the Murder Case of Sidhu Moose Wala

On 30 May 2022, Punjab Chief Minister Bhagwant Mann announced an inquiry into the murder case of Sidhu Moose Wala by setting up a judicial commission formed under the chairmanship of a sitting judge of the Punjab and Haryana High Court. On the first day of the investigation, the bullets of an AN-94 Russian assault rifle and a pistol were found by police at the spot of the killing. On 30 May 2022, a mob of protesters of the Indian National Congress attacked the residence of the Aam Aadmi Party president Arvind Kejriwal in Delhi and blamed the AAP rule Punjab government was responsible for the incident as they had curtailed the security of Moosewala. Delhi Congress president Anil Kumar said in a media conversation,

The AAP government is responsible for the daylight murder of Sidhu Moosewala. Arvind Kejriwal should answer why Moosewala’s security cover was withdrawn although his life was under threat and it was known to intelligence agencies in Punjab.”