I was more than okay with that arrangement. I think having two happy parents in different homes is much more preferable than two unhappy parents in the same home. I think I am the way that I am because my mother didn’t let me feel any kind deprivation for even a second. I have a very hands-on mother. Once my brother and I were born, she did nothing but look after us.”

I am so glad that you asked me that. I have no idea how I have done this film. I have tried my best but I feel I couldn’t have done any of it without Sushant. He has just been the most helpful person I have had. There were days when I was lost and scared as it’s the first time I am facing the camera but he has been hands on. Sushant also helped me improve my Hindi and whatever little I speak, he has taught me. He has helped me a lot.” I am a big fan of Neha Kakkar as she is a great singer, I really love her songs. It’s a fan moment for me. I was so excited before coming on Indian Idol 10 to meet Neha. I have been listening to her songs for a long time. Her songs actually helped me to lose weight. I used to run on the treadmill listening to some of her hit songs on repeat mode.” 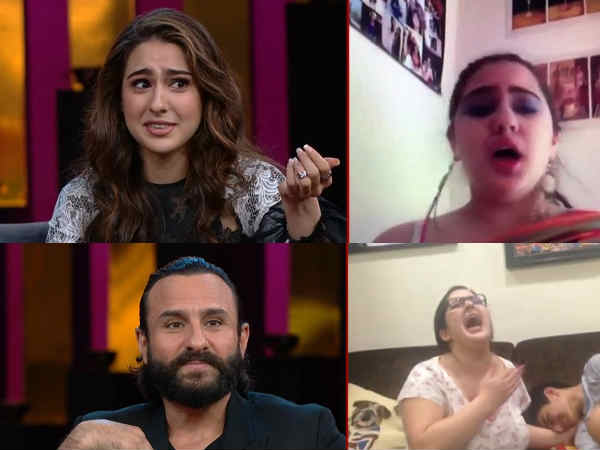 Everyone has been clear about their dynamics with me. It has never been confusing. Kareena herself says that ‘look you have a mother and a great one and what I want is for us to be able to be friends.’ My father also never said ‘this is your second mother’ or made it any way uncomfortable. My mom dressed me for my father’s wedding. A lot of people would be of the opinion that Kareena was being weird or mom was being weird. It was very comfortable. Everyone was so mature. It was not a big deal.” Sara Ali Khan With Her Stepmother and Brother

I have seen her do a very funny advert when she was four and she’s been like this all along. There was actress Aishwarya Rai on stage in New York with people going ballistic and Sara sitting on the floor behind the curtain saying, ‘This is what I want to do.”